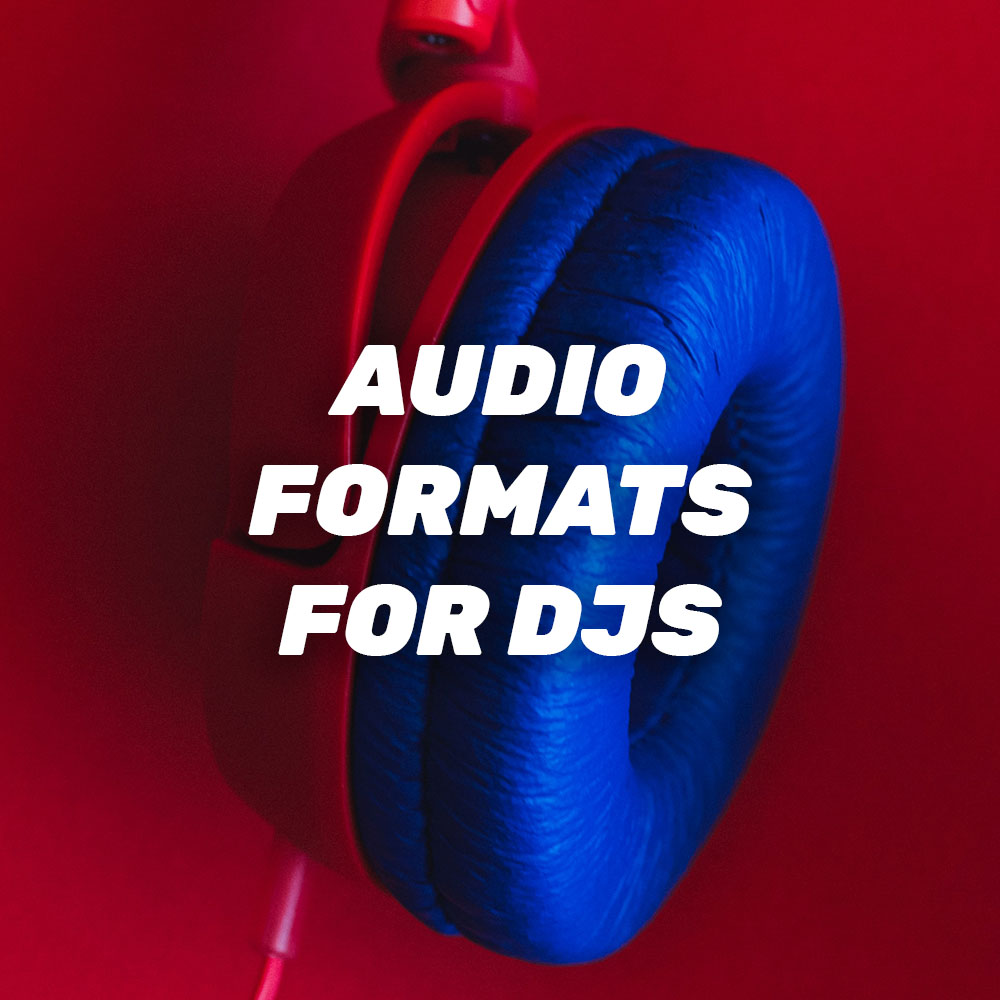 Digital audio has been around a very long time so there’s bound to be a plethora of audio formats out there. Here are some of the more common ones that DJs use, and what differentiates them. Us this blog to help you understand which format is best for you and your DJ career.

WAV and AIFF are both high quality audio formats and suitable for large DJ performances. They are larger file sizes than MP3 but of better quality. WAV was designed by Microsoft and IBM and AIFF was designed by Apple. AIFF is the better of the two for DJs who are downloading music online because when you download AIFF from retailers like Beatport you will get metadata along with the file. The downside of WAV is that there is often no metadata which means when you download a WAV you won’t get the artwork or any other metadata with most programs.

Both WAV and AIFF are lossless audio container formats based on PCM (Pulse Code Modulation) with some minor changes in data storage.  PCM audio, for most people, comes in these formats, depending on whether you use Windows or OS X, and they can be converted to and from each other without degradation of quality.  They are both also considered ‘lossless,’ and are uncompressed stereo (2-channel) PCM audio formats sampled at 44.1 kHz (or 44100 times per second). This amounts to roughly 10 MB per minute.  If you’re recording at home for the purposes of mixing, this is what you want to use because it’s full quality.

These formats use advanced algorithms to compress audio. They have better quality and fidelity than WAV and AIFF. Not all music retailers sell these formats so they be harder to come by. They might not work with all DJ players so many DJs stick with AIFF, WAV or MP3. They are mainly used by people listening to audio with high-quality setups at home.

The Free Lossless Audio Codec (FLAC), Apple Lossless Audio Codec (ALAC) and Monkey’s Audio (APE) are all formats which compress audio, much in the same way that anything is compressed in the digital world: using algorithms.  The difference between zipped files and FLAC files is that FLAC is designed specifically for audio, and so has better compression rates without any loss of data.  Typically, you’re seeing about half the size of WAVs.  That is, a FLAC file for stereo audio at ‘CD quality’ runs roughly 5 MB per minute. If you’re an audiophile and listen to a lot of music with dynamic ranges, these formats are for you.  If you’ve got a great set of speakers or headphones, these formats will bring out the tones to showcase them.

Want to learn more about how digital audio compression works?

To learn more about how lossless audio works you should research the Nyquist-Shannon Sampling Theorem.

These formats are lower quality than lossless formats but have a smaller file size making them easy to download and store. MP3 is very popular with DJs who have a limit to how much music they can store on their devices. Often new DJs will also use MP3 as they are cheaper to buy and more stores will offer them as a download.

Most of the formats you see in day-to-day use are “lossy” meaning some degree of audio quality is sacrificed in exchange for a significant reduction in file size.  An average MP3 runs about 1 MB per minute. This is called compression, but unlike with lossless formats, you can’t really get that quality back once you strip it out as the case with lossy formats. To get the quality back would like being able to unbake a cake!  Different lossy formats use different algorithms to store data, and so they typically vary in file size for a comparable quality. Lossy formats also use bitrate to refer to audio quality, which usually looks like “192 kbit/s” or “192 kbps.”  Higher numbers mean that more data is being pumped out, so there’s more preservation of detail.

Lossy formats are commonly used by consumers with devices in which storage is an issue. For example, when the iPod was released its famous tagline was ‘Fit 10,000 songs in your pocket’ This was made possible with lossy compression.  They’re designed to be an economy of hard drive space.  Which format you choose depends on what digital audio player you use, how much space you have, how big of a quality nitpicker you are, and a bunch of other variables.  Nowadays, computers will play anything, most audio players (except Apple’s, of course) will do multiple lossy formats, and more and more do FLAC and APE.  Apple sticks to MP3, ALAC, and AAC.

The truth is that music and general audio quality are quite subjective. What sounds like a good quality file to a bedroom producer may sound painstakingly awful for a studio pro. One thing you should do over the course of your experience with music is an experiment to see what works best for you and your music. Remember that the quality of your speakers, headphones, DJ controller or decks and studio space make a massive difference! Be aware that as your tastes change, so will your perceptions, your equipment, and the importance of quality.

We do however recommend that you set a minimum benchmark of an MP3 320 upward. Any audio of less quality than 320 is not worth it! This means no YouTube rips!

Want to learn how to DJ or produce?

If reading this blog sparked your interest in different audio files, or if you’re keen to understand more about sound, why not enrol in one of our DJ or music production courses at London Sound Academy or at our studios in Manchester or Birmingham? We also offer online tuition too!