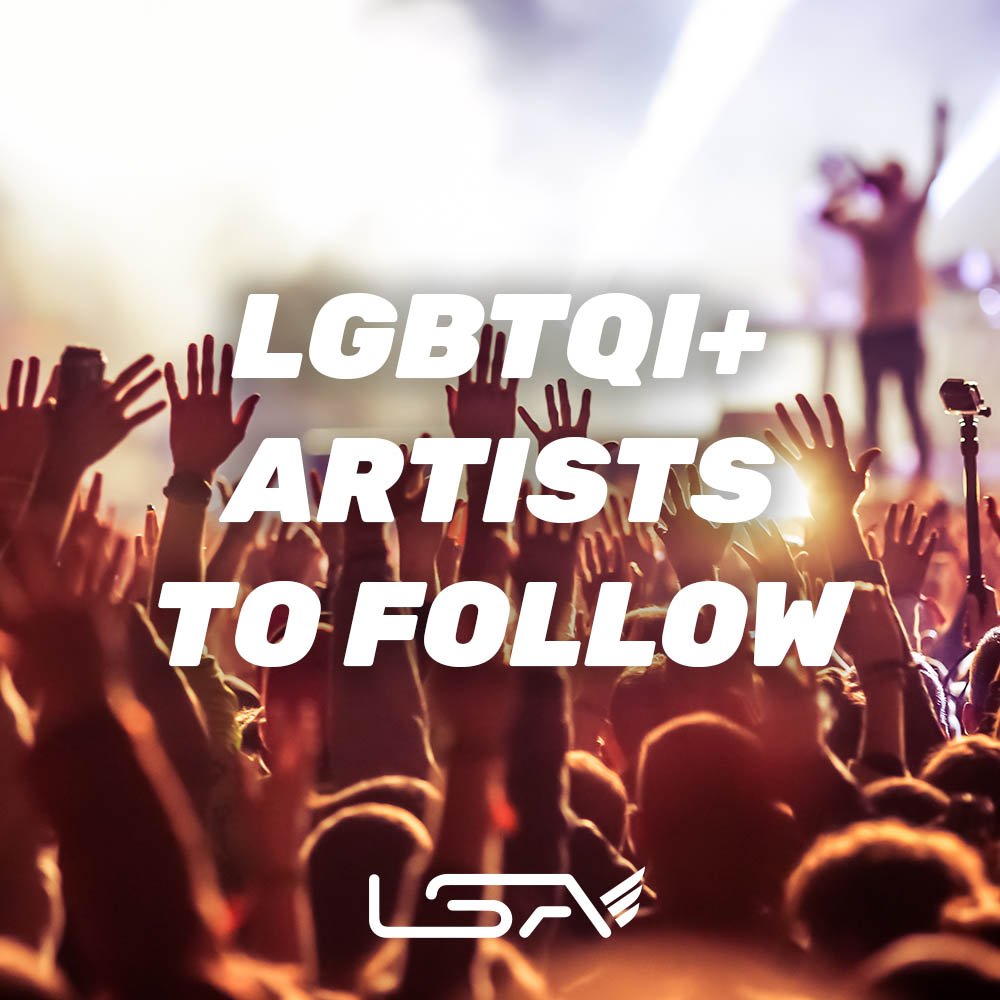 I’m back again with the next five LGBTQI+ artists to follow! I hope you’re returning from reading the first instalment having fully immersed yourselves in the wonderful music of the first five artists and desperate to hear more! Wait no longer, here they are. I’ve enjoyed writing about these artists so much and I hope you discover someone or take a deeper dive into the music that these wonderful people have made.

DJ, music producer and footballer Lucy Monkman, known as ‘Monki’ isn’t missing much! Another early starter, she played her first DJ set at the age of 17 and claims her interests in electronic music stems from her Mum listening to Chemical Brothers and The Prodigy in their South London kitchen when she was growing up. Monki is proof that hard work and determination can help you achieve your dreams after she worked her way up from an intern at radio station Rinse FM to being poached by 1Xtra and eventually Radio 1, where she ran an immensely popular weekly show for 6 years.

After stepping down from the show, she has since continued on the upward trajectory and started her own label & Friends, as well as a fortnightly radio show with Defected Records; to whom she is signed.

Monki has also enjoyed releases with Jamie Jones’ HotTraxx, Toolroom and recently Jamie Jones’ new venture Hot Creations; releasing the chart topping ‘Yurican Soul’. Her sound had evolved over the years and offers flavours of house & techno, with very clear nods to her early influences; a good example being her recent release on Pets Recordings ‘Flipside’ On top of all of this, Monki has toured the world with a schedule spanning the US, Europe, Asia and Australia. She is A&R for Atlantic Records and also plays football to a pretty high standard for Dulwich Hamlets FC.

Check her out - there will be plenty of music released this year to add to her already impressive catalogue. My favourite has to be the journey of a track that is ‘Work It’, link at the top of this section.

There is no stopping this girl right now. 2021 has seen Jess go from strength to strength, despite the hard times we have all experienced. Her career is flying and it’s with credit to her hard work and solid foundations she built within the industry from day one. She boasts the support of Hannah Wants, Annie Mac, MK and Sam Divine, who has been a huge part of Jess’ career as it has flourished. Jess acts as an A&R, plus Digital Manager for Sam Divine’s label DVINE Sounds and is held in high regard by not only DVINE but Defected too, where she has become a go-to DJ.

Having enjoyed a monthly residency at London’s XOYO, she has also played sets at some of the UK’s most prestigious venues and festivals and in the past 12 months branching out globally. She has launched her own club brand Superstore and will soon (from Sunday 11th July) be the new face of Capital Dance’s weekly Sunday evening 4-7pm show. Jess also hosts a podcast for Hidden Strength UK where she talks openly with people from all walks of life about challenges we face with our mental health and tips and advice on how to get through it. It’s such a positive and selfless engagement, which proves there is so much more to Jess than just her music. Her tracks have been coming thick and fast in recent months and her deep house, sophisticated sound has really started to turn heads and she has developed a very recognisable sonic.

With releases such as ‘Back & Forth’ feat. Lily McKenzie on Stress Records, ‘Love We Had’ on Good Company and ‘Bring Me Down’ for Simma Black. In addition to some incredibly good remixes including her latest, ‘So Much Love’ out now on FFRR, originally released earlier this year by Owen Westlake and featuring vocals from Lloyd Wade. This is set to be one of the tracks to our summer so I can guarantee you’ll be hearing a lot more from Jess this year.

Just Her’s sound is so incredibly unique and beautiful. I would go as far to say that she is one of my favourite electronic artists out there. From techno, to breaks, to electronica, every piece of music she produces is stunning and full of emotion and feeling, which is what I always look for when selecting. Based in Brighton, Just Her is a seasoned pro and her dedication has seen her become one of the games most respected producers and she is now rightfully receiving global recognition.

Just Her has released records for the likes of Crosstown Rebels and Glasgow Underground, as well as huge successes with multiple releases on Anjunadeep, plus she also heads her own label and art concept Constant Circles! As if she isn’t busy enough, Just Her has had several highly regarded radio shows on the likes of Frisky and Proton. She is an advocate for trans rights and a passionate member of the LGBTQI+ community, plus she performs regularly at He.She.They events across the UK, on top of an already packed and exciting gig schedule.

Her releases include ‘Follow You Down’ featuring her own vocals, which quickly became one of the biggest selling releases of 2017 on Global Underground, EP ‘Conscience’ for Culprit, ‘Fall From Grace’ on Global Underground, ‘Kill With Love’ on Toolroom and most recently a whole host of releases on Anjunadeep; most notably the ‘Beautiful Nothing’ EP released earlier this year. I’d watch this space with Just Her. She is full of creativity and innovation and I, as should you watch with fascination as her next venture unfolds.

You may well have heard of Eli & Fur. Fresh off the back of dropping their studio debut, dual part album ‘Found In The Wild’ Eliza Noble and Jennifer Skillman, friends since childhood, are flying high. Having started out as a DJ duo, the pair have since adapted their performance to live Ableton sets where they perform their own unique and melodic productions using electric instruments, synthesiser and their own vocals. Their sonic is warm and innovative, merging house and techno sounds, creating a vast soundscape that really sucks you in. It’s powerful, yet elegant, intricate and musically intelligent, which comes as no surprise with their background in songwriting.

Eli & Fur burst onto the scene in 2013, when they saw their debut release on NYX Records ‘You’re So High’ reach the top 3 on Hype Machine and it has since received multiple millions of  views on YouTube. They followed this up with a collaboration with Shadow Child, ‘Seeing Is Believing’ on Defected, ‘Feel the Fire’ on Anjunadeep and ‘Your Eyes’ which was a self-release on NYX Music, teaming up with Beatport in the first ever Artist Partnership on Beatport’s then newly launched streaming platform. It was 2015 however, that saw Eli & Fur do what so many musicians long to do. Their release ‘California Love’ put out on Anjunadeep exploded and propelled them into the US market, leading to a US tour and their first ever appearance at Coachella in 2016.

Eli & Fur are no strangers to a big stage and on top of Coachella, Glastonbury, Tomorrowland and Creamfields, they have featured on BBC Radio 1’s Essential Mix and performed at Christian Dior fashion shows and even featured in Vogue!

In recent years Eli & Fur have seen themselves go on to be a big part of the Anjunadeep family, not only releasing their debut album with them but also a host of EP’s and remixes including ‘Chlo/ Wendy Legs’, ‘Into The Night’ and ‘Walk The Line / Big Tiger’. They have released on two occasions with Danny Howard on his Nothing Else Matters outfit; ‘If You Were’ in 2019 and most recently ‘Next To Me’ earlier this year and enjoyed success with ‘Fuse’ released on Armada in 2020, which was remixed by Patrice Baumel. Plus my personal favourite ‘To The Sea’ where they collaborated with Booka Shade for an EP on Blaufield Music.

You really should check these amazing women out, I haven’t even covered half of their impressive achievements and there will be so many more to come. Check out this really cool set they performed this year from Malibu. Keep your eyes well and truly peeled!

‍
I mentioned Samantha Togni briefly in part one of this blog when talking about the amazing Wax Wings. But this blog would not be worth writing if I didn’t talk about Samantha Togni. Samantha is a world renowned DJ, producer, mixing engineer and founder and core member to some of London’s most exciting club movements.

Samantha has gained the respect of some of the industry's biggest names for her incredibly well produced music but it’s her innovation and artistry that sets her apart from the rest. Her sound is constantly evolving and captivating audiences with a fusion of techno, electronica and underground influence.

As well as her monthly residency at EGG London, Samantha is the founder of Boudica, a collective aiming to give visibility to women and non-binary artists, that is not just a club night but also a radio show, podcast, conference and even vinyl record label. This, along with her influential role in club collective INFERNO are examples of the way Samantha has a talent for merging music with other arts, culture and advocacy in a wide spectrum of ways; both of these movements have gained interest from the likes of Dazed and I-D.

Her productions include ‘Whisperers’, released on our very own LSA Records in 2020 including remixes by Wax Wings, Third Wife and Neri J. Her ‘Future Cells’ EP released along with Lady Maru on OBSCUUR in June and ‘Trust Issues’ an EP release on internetghetto with the title track being a huge success. All of this has led to her headlining super-clubs all over the world from Tokyo to the US and gracing the decks of prestigious venues such as o2 Brixton Academy, Ministry of Sound, Electric Brixton and many more across Europe.

To top all of this off Samantha uses her knowledge and experience to help others to succeed with her position as a tutor at London Sound Academy.
You can catch Samantha at the Orange Yard in Soho for the Community Rave on Monday 19th July and at her Boudica event at The Pickle Factory on Saturday 24th July, plus many more over the summer and the remainder of 2021.

If you would like to become a DJ or producer enrol with London Sound Academy. Learn online or in the studio with the experts! All courses are taught one to one. Click here to join.