The Best Clubs in Ibiza 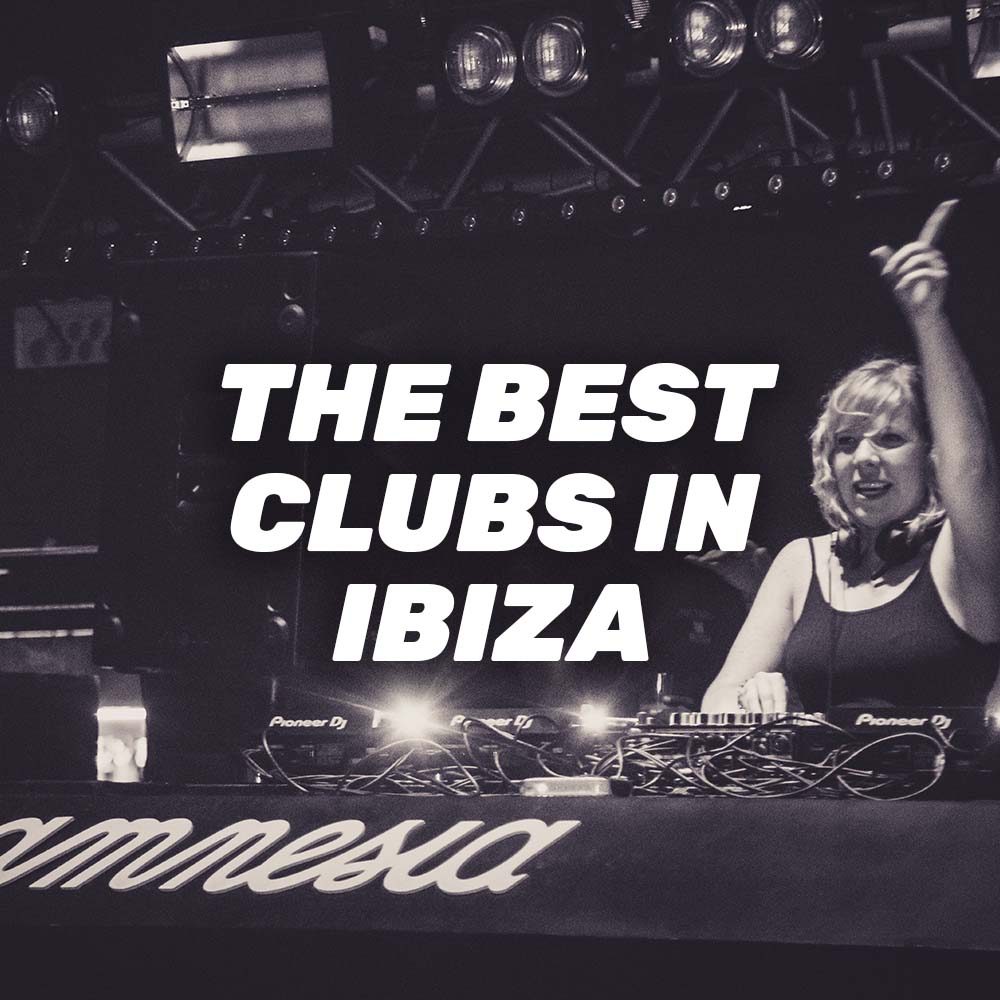 The Best Clubs in Ibiza

Ibiza is one of the most revered party Islands in the world. Every summer LSA take a group of graduates from our famous DJ course to the island to party hard and DJ all over the island! It's a dream for many DJs to visit and DJ in Ibiza! If you want to make that dream a reality join our DJ course by clicking here.

Ibiza is a luscious island is scattered with some of Spain’s most glamorous beach bars, terraces, hotels, pubs and clubs - and with over 40 clubs to choose from, Ibiza can satisfy even the most hedonistic party goers. Millions of people flock to Ibiza each year from all over the world, and we’re pleased to say we’ll be joining them! So with our LSA Ibiza tour kicking off in just over a month, we’re celebrating with our list of Ibiza’s best clubs in no particular order!

Amnesia may not be the biggest club in Ibiza, but it’s definitely the most synonymous. Attracting Balearic veterans and Ibiza amateurs alike, this 5,000-capacity super club boasts two of the most iconic rooms in the Ibiza club scene - the industrial main club room and its esteemed terrace room which allows for a beautifully sun-spilled dance until the early hours of the morning. The club is also famous for its willingness to let DJs experiment on stage, which has led to some of history’s most iconic parties. 46 years since its inception and the club is still going as strong as ever. Expect the best of House, Techno, Bass & Latin music at this incredible club.

Dubbed the original Ibiza super club, Pacha first opened its doors in 1973 and has been responsible for the prolific rise of club culture in Ibiza. It’s this iconic heritage that makes it one of the most glamorous clubs in the whole of Ibiza, and the subsequent movement of members clubs, restaurants and hotels has evolved Pacha into an empire for the wealthy and hedonistic. When visiting Pacha for a club night you can expect the 3000-capacity venue to have an eclectic mix of EDM, Tech House, Disco, Pop and R&B in its 5 different rooms, all with a unique feel to them.

Not only does Privilege earn its spot on Ibiza’s biggest super clubs, but it also holds the accolade of the world’s biggest nightclub, with a mind-blowing capacity of 10,000 people. The club covers a total of 70,000 sq ft, so it’s not a place you’d want to lose your friends in! Privilege’s size isn’t the only incredible thing about it. Since opening in 1978, it’s hosted some of the island's most famous parties and its neighbouring room, the Vista Club, is encased in a glorious glass dome which is perfect for watching the sun come up whilst listening to some of the best House and Techno the island has to offer.

For those who prefer to do their raving outside in the blissful heat, or perhaps if you’re more of a poolside partier, Ushuaia is the super club for you. Ushuaia is Ibiza’s premier outdoor club, but it’s also one of Ibiza’s best clubs full stop, with some of the world's biggest DJs playing sets here. The club never shies away from a day party either, meaning you can keep the sesh going for longer. This season's events include that of Calvin Harris, David Guetta, Swedish House Mafia, Solardo and more. So if you’re an EDM or Tech House nut, this is the club for you.

2016, unfortunately, saw the closure of one of Ibiza’s most prolific clubs, Space. However heartbroken you may or may not have been, there was a silver lining to its closure. Out of Space Club’s ashes rose Hï Ibiza, the newly renovated and reimagined version of Space Club. This renovation brought Ibiza’s most high-tech improvements to the sound system and lighting rigs, making it the newest and most technologically impressive club on the island. No wonder it was voted the world's best club in 2019. Not wanting to live in the shadow of Space’s incredible roster of artists, the club worked with the likes of David Guetta, Black Coffee, the Martinez Brothers, Fisher and many more, to bring the same quality electronic music that Space became famous for.

DC10 started off with humble roots, being largely under the radar for a while and building itself up through its famous Monday Morning sessions party, which ran from 6am through to 6pm. This revolutionised the Ibiza party experience and soon became a firm favourite on party-goers Ibiza bucket list. DC10 stayed true to its roots, mostly upholding a House & Techno scene in its walls. The club has now expanded to its current capacity of 4,000 and remains one of the island's best clubs for underground sounds, and the club's Circoloco event has become one of its most esteemed events year on year.

Not strictly a super club, but it’s recognised for its contribution to Ibiza’s long-standing history of daytime partying. Benimussa Park is also Ibiza’s biggest open-air club, so we thought it deserved some recognition. Similarly to DC10, Benimussa Park upholds its underground music roots, putting on parties that range from House and Techno to Breaks, Garage and Rave. Benimussa Park is also famous for its Sunday night event, Zoo Project, which hosts the best in underground techno beats. Expect a vibrant atmosphere with fancy dress and beautifully vibrant stage designs that will keep you wanting to come back for more.

Eden is the second super club located in the San Antonio area. It has undergone a few transformations in its past, being formerly known as Star Club, a notorious club in the 90s. It then briefly morphed into Kaos, before becoming known as Eden in 1999. Eden currently has one of the best sound systems on the entire island. This and being reasonably priced for its size makes it an underground music lover’s paradise. Despite its super club capacity of 5,000, Eden doesn’t shy away from letting lesser-known DJs have the prime-time spotlight either, making it a hugely varied club in terms of style. Defected in the House is one of Eden’s most famous parties so be sure to check it out for all that Tech House goodness!

Last but definitely not least, we have Ibiza’s own slice of paradise. Es Paradis has been cited as the island’s most beautiful club, and for good reason. Lavish pillars tower over partygoers and surround the dancefloor to create an ethereal club experience fit for Greek royalty. Take a look around to see the club’s beautiful decor adorning the walls, and look up and watch the Es Paradis culminate in a glorious glass pyramid roof and prepare to be amazed. Explore its luscious labyrinth garden to the sound of Ibiza’s best Balearic beats. VIP booths and group areas are available for those special nights with friends. Es Paradis’ most famous night is its Fiesta Del Agua (Water Party) where you can enjoy the paradise that is Es Paradis under one huge sprinkler!

Octan (formerly Sankeys) is Ibiza's most underground urban feeling club. It has low ceilings and is smaller than many of the big super clubs, however still a decent size! This is the perfect place to discover underground artists and emerging artists! Octan joined Ibiza’s super club royalty in 2019 and in its debut season was voted no.58 of the worlds best clubs by International Nightlife Association. Its aim to host world class DJs in a world class environment with state of the art VOID sound system bringing back the original Ibiza club culture alongside that raw underground atmosphere.

Known for its hedonistic party hard and young crowd Ibiza Rocks hotel is one of the most famous venues on the island. Based in San Antonio it attracts mainly British tourists who want to party hard with an eclectic mix of commercial music. It's an iconic poolside music venue at its heart. It's a pioneering resort-style hotel that has been shaping the sound of Ibiza since 2008, always evolving to capture the energy of the moment and to connect thousands of guests to the best sounds and experiences this magical island has to offer.

Ocean Beach is a large beach club that has really turned itself into a full on day-time club. It's one of the go-to destinations for many tourists in Ibiza. They have a luxurious pool-side with big loungers, expensive drinks, bottles of champagne popping off and international DJs. The O Beach Ibiza brand offers a unique, lavish and fun lifestyle experience within a poolside environment enabling its customers to luxuriate in high-end service and aesthetically beautiful surroundings, all complimented with a credible soundtrack and world class entertainment. It's the place to go show off your fake tan and your beach body. Tatt sleeves are a must!

For its size, Ibiza’s club scene is unrivalled. With the sheer scale of its super clubs and attendees year on year, it’s no wonder 5 of the clubs on our list also make an appearance on the top 25 best clubs in the world. For such a small island, that is a very impressive feat. But not only do the super clubs make Ibiza special, its smaller grassroots venues also deserve a lot of spotlight. Ibiza offers a night out for every mood, genre or occasion, and is truly suited for party veterans and amateurs alike. For those who prefer to party on the waves, Ibiza has an abundance of boat parties to join in on too. In fact, LSA will be playing at one of them! If you’re an LSA graduate and you’d like to join us on our first Ibiza tour in 3 years click here to contact us to find out how you can DJ in Ibiza with LSA.