The Best Techno Nights in London 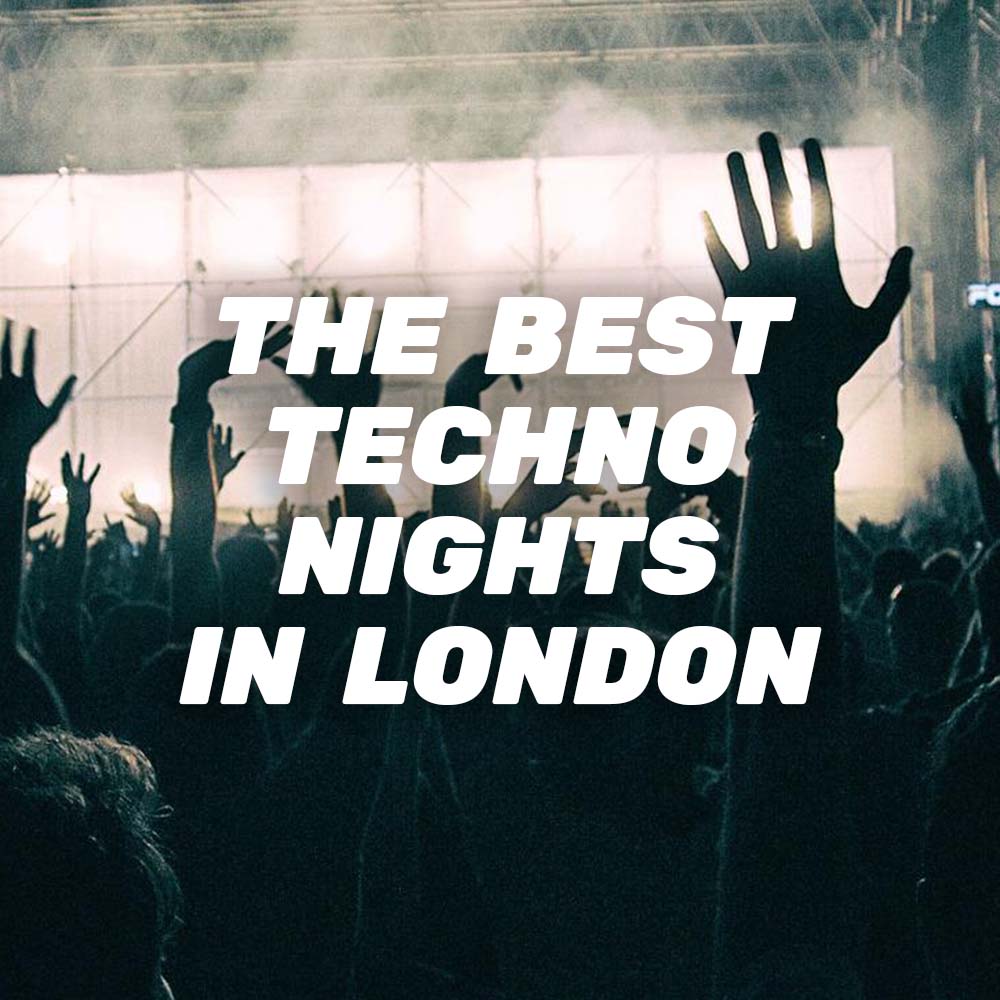 The Best Techno Nights in London

We love all genres at London Sound Academy and many of our DJ course and music production course students love Techno. Many are visiting the UK to take our world famous courses and to help find their feet in the local Techno scene we've compiled this blog!

From its beginnings in Detroit all the way to Europe - Techno has birthed an uncountable number of sub-genres. In the last few years though, Its rise toward the mainstream has been undeniable, with huge labels such as Drumcode bringing it to the forefront with high-profile artists and unparalleled production value.

Now die-hard techno heads proclaim Techno is dying or lament 'business Techno', but in reality forks of the genre have just retreated further underground where it will always be revered. London is very much a spirit fairer for the techno scene, breathing new life into the underground. The city consistently puts on understated Techno nights featuring world-class Techno DJs in London’s best underground venues. Not to mention all the smaller techno nights dedicated to celebrating and uplifting marginalised communities. To put a spotlight on this incredible genre and what it stands for, here are some of the best Techno nights you can go to in London.

Teletech is London’s answer to the thriving lifeblood of Berlin nightlife - located at FOLD, one of London’s newer additions to the techno club scene. Teletech is known for putting on an eclectic lineup consisting of DJs who really know how to encapsulate the best energy and variety that techno has to offer. Previous DJs on the Teletech roster have included underground techno royalty DJ Stingray and I Hate Models, and Lobster Theremin head honcho Asquith as well as exciting up-and-comers like Charlie Sparks and Bailey Ibbs. If you really want an unforgiving night of techno, make an appearance at one of Teletech’s 24-hour events. Here you can expect nights to run for 24 hours 10pm through to 10pm the next day, which is extremely rare for London! Luckily due to FOLD’s location in Canning Town, it benefits from no neighbours and therefore can get away with playing extremely loud music. When entering FOLD, you can anticipate dark open rooms with pulsating 4/4 techno and electro. Not for the faint-hearted!

Percolate is known for its highly varied and heavily curated nights that bring a whole wealth of sounds and emotions to its parties, putting on events at some of London’s best underground electronic music venues such as Colour Factory, E1, Village Underground & Pickle Factory to name a few. The genres that they curate tend to vary, but it’s their techno events that are the ones to look out for. Having hosted huge names like Ilian Tape bosses the Zenker Brothers, Surgeon, Moxie, Midland, Mall Grab and Sochi Terada, their esteemed parties will take you through every peak and trough that spans the genre, so hold on tight!

Since its inception in February 2015, Inferno has solidified itself as one of the most prominent LGBTQ+ club nights in London, Infusing techno raves with hypnotic performance art. Occurring monthly in various venues across London, Inferno champions trans+, non-binary and queer DJs and performers, never failing to garner an energetic crowd. Inferno founder Lewis G. Burton regularly performs these nights and it has even had one of our own London Sound Academy graduates, Samantha Togni perform! The party also hosts a plethora of international DJs all from queer backgrounds, many of whom run their own queer parties. Notable DJs include Wax Wings, Venice Calypso & Becky Stroke. Inferno has run nights in esteemed venues around Hackney Wick such as Colour Factory and The Yard.

In the years since its inception in 2009, Krankbrother and the London nightlife scene have been synonymous with each other. The promoters have put on some of the most unforgettable music events in the underground, and have thrown parties in forgotten buildings, public spaces and one-off outdoor locations alike. Being independently run and family-owned, there’s no limit to Krankbrothers ambitions and creativity. They are also the founders of Naked City and Re-Textured, two of London’s newest and exciting festivals hosting a whole plethora of techno artists. You can expect a promotions company of this calibre to attract some of the world's best techno artists, and they certainly have delivered on this expectation. Some of these fantastic names include Electro queen Helena Hauff, VTSS, Matrixxmann, Stenny, Rodhad, Paula Temple and more. Krankbrother has hosted events at unforgettable venues like Printworks, Hackney Church, Village Underground, E1, Pickle Factory to name a few.

The Hydra has been responsible for some of London’s most innovative, culturally important parties and event locations in recent years, and has become synonymous with the dynamic yet sometimes capricious electronic music scene in London. Having been an intrinsic part of its development since its inception in early 2017, The Hydra form an integral and ongoing part of the core team behind Printworks and has hosted some incredible events there in the winter seasons. The incredible reputation that Printworks garnered over such a short time allowed The Hydra to book some of Techno’s most legendary Detroit names such as Jeff Mills, Robert Hood & Moodyman. On top of this, they have also hosted some of the best names in UK techno like Ben UFO, Blawan & Leon Vynehall. Devastatingly, Printworks is due to be closing in the next year, so enjoy its last upcoming season this winter with Hydra while you can!

Riposte is another important collective that celebrates the queer community through visual and performance art, techno raves and creative installations. Hailing at London’s longest-running alternative venue Electrowerkz, the collective regularly organises incredible transformative and progressive performances, always soundtracked by incredible DJs that play the best techno music has to offer. Visual art is always prevalent on Riposte nights too, carving out spaces for queer artists to showcase their work in an uplifting community. Riposte has also recently started host day raves in secret locations, so it's clear to see that the brand is creating some buzz. Look out for their upcoming nights in the future!

Another contender for one of the best techno nights in London, UNFOLD is the Sunday party London has always needed. Hosted in FOLD, the night focuses on championing London’s local talent, metaphorically and literally placing DJs in the heart of the venue. This decision to have the DJ in the middle of the room results in the crowd gathering around in a circular formation, making the event feel more of a ceremonial gathering than a rave. It always starts at 10am so it’s the perfect spot for the more fresh-faced ravers or the more hardcore techno crowd yearning to carry on Saturday night's party. They even serve coffee! So If you’re after collective energy like no other at one of London’s best clubs, look no further than UNFOLD.

Adonis - The Cause & Multiple Venues

Adonis was born out of a necessity to breathe new life into the underground electronic music scene. Originally established at Tottenham warehouse club The Cause, Adonis has acquired a cult underground following, specifically from the queer community. Stripping back all the cheesiest elements of queer club culture and introducing a strictly sweaty, non-glam way of partying was at the forefront of Hannah Holland’s goal, the main resident of the Adonis party. While some front runners of the scene play huge, overproduced club events, other key figures in the scene hosted by Adonis played in this progressive but stripped-back venue. Namely UK legends like Daniel Avery, Saoirse, and Berghain/Panorama Bar veterans Roi Perez and Tama Sumo. Sadly, The Cause has closed its doors, but that wasn’t stopping Adonis. In February of this year, they were announced as special guests for the Iconic after-hours club The Trade’s 30th birthday party at Egg Ldn. Talk about making waves in the scene!

What’s important about Techno is not just the sheer number of quality clubs, promoting companies, record labels, DJs and Producers that keep the genre alive, but also the wider recognition that Techno is and always will be a safe space for all communities regardless of race, background or gender. This legacy makes London one of the best cities in Europe for electronic music. If you too have a passion for Techno and want to learn to DJ or produce Techno get in touch with us at London Sound Academy! Click here to contact us.