What Are Sound Cards? 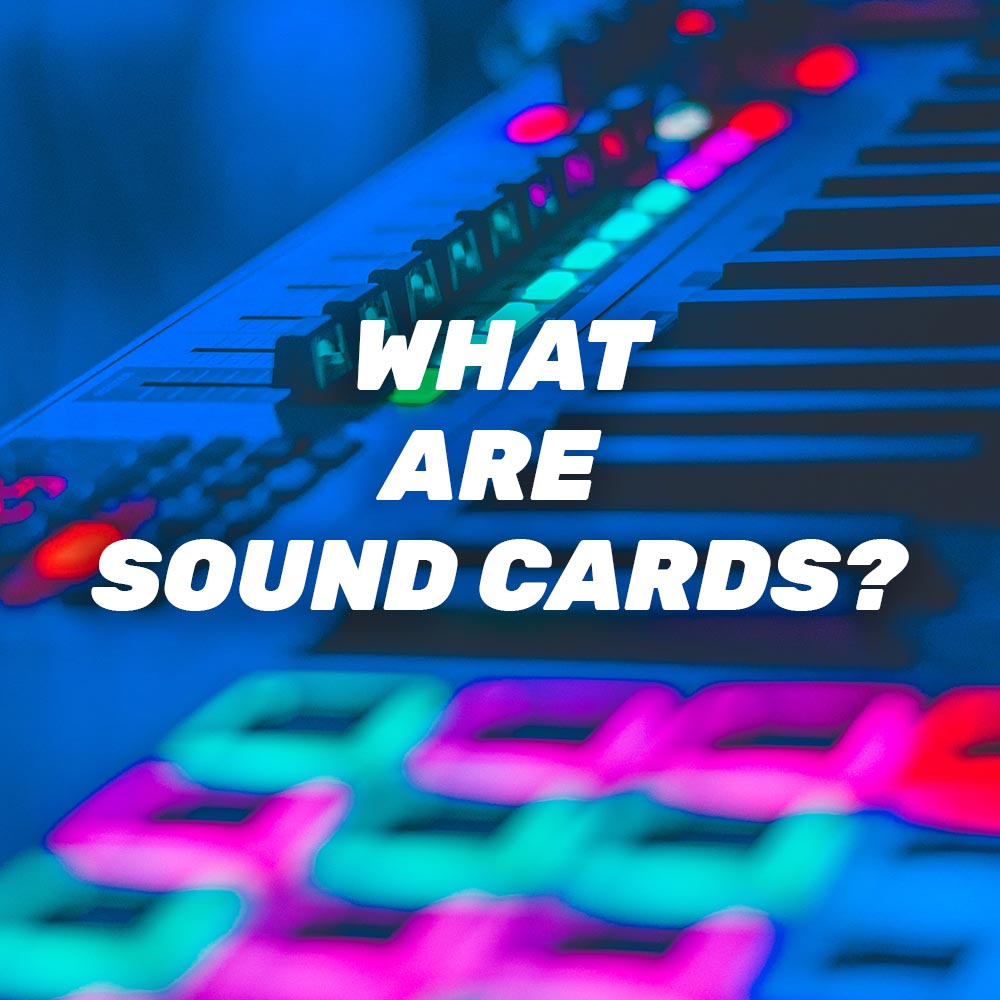 What are Sound Cards?

You're using a sound card every day! Sound cards have many uses to do with audio like playing computer games, watching tv and using teleconferencing apps like Zoom.

Why do we need them?

Sometimes, the easiest way to think of an external sound card is that it's like an adapter. If you want to plug in professional studio monitor speakers into your laptop how are you going to do that? Laptops don't have the right holes for the type of audio cables you would need to connect speakers. If you want to use speakers like these you need some sort of adapter, that is where an external sound card comes in.

Okay, so it's not quite that simple but at least you have the basic concept now. In addition to being a fancy adapter of sorts, sound cards will process the audio. It will make sure your audio outputs like the sound from your speakers is high quality and on the flip-side it will also control your audio input quality, so that when your record your guitar you get good recording.

Why do music producers use sound cards?

When you’ve been producing music for a while, you tend to hear sound differently. Think back to when you were just a passive music listener, or you let ambient listening be the forefront of your sonic experience. Were you thinking about how the sound in your favourite track was processed? Or how the frequencies sound in your ears compared to the way the artist or producer intended them to be? There are a huge amount of factors that go into sound design, so that the listener can have a truly enjoyable experience, even if the listener has no clue why it’s so enjoyable. This is where sound cards come into play - and despite integrated sound having improved drastically over the years, sound cards are still very much a producer must have.

The most common form of sound cards are called DAC’s (Digital Audio Converters) and these sit outside of your computer. Sound cards are important for audio clarity because having this external sound processing power completely bypasses the electrical interferences that often bleed into the built in sound processing portions of your laptop or computer. These electrical interferences often manifest themselves as hissing, crackling or maybe even distortion. If you’re a producer looking for a clear and perfect representation of sound for your tracks, or you're a collaborative musician working with many different sounds and instruments, you’d want to look at getting an external sound card. Here is our pick of the best sound cards on the market and why.

The Focusrite Scarlett 2i2 3rd Gen is an ideal sound card for beginner producers because of its ease of use. It has a solid sound with a decent build quality, The 2i2 series is fairly affordable, at the lower to midrange price point. It features 2 inputs and 2 outputs, which is great for a home studio that holds a couple of additional analog instruments. The 2i2 also has two of the best performing Scarlett mic preamps the range has ever heard, now with Air, for miking up guitars or recording vocals.

Behringer equipment has a good reputation for build quality vs price, and the Behringer UMC404 HD is no different; being one of the cheaper options in our list. It’s priced similarly to the Focusrite but you easily get more for your money due to its 4 inputs and 4 outputs. It’s great for recording multiple instruments and vocals at the same time, meaning this sound card might be more suitable for producers who have more experience with additional instruments. On the cheaper end, but build quality and sound quality doesn’t seem to suffer too much.

The logic SSL2+ is a little more expensive, but if you’re looking to take your productions to the next level it’s well worth it.  but sound quality is definitely superior over the Focusrite, however parts of the casing are plastic, not metal. Whilst build quality is very good, a metal case would be a nice addition if you are a travelling producer or you move the sound card regularly. The sound card has an Incredibly flat response for monitoring, with a crisp clean sound. Great for any home studio and producer that wants to achieve the most professional sound for a reasonable price. The 4K option on the inputs also adds a nice colour and warmth to the sounds. Inspired by classic SSL consoles, the 4K mode adds extra analogue character and sparkle to your sources when needed.

The Presonus Audiobox USB 96 is the definition of cheap and cheerful and is a great choice for travelling producers or producers on a budget. Small and compact, the sound card boasts a steel chassis capable of taking a beating and still remaining completely reliable. It also has 2 inputs and 2 outputs, so you can record with multiple instruments and vocals. Its functionality cannot be faltered, with an easy to use USB 2.0 power source, so you can plug it in and use it wherever you have access to a laptop.

The Air 192/4 is not the cheapest M-Audio interface there is but the additional sound quality on the Air definitely makes it the preferable choice, and it still comes in at under £100. The Air has 2 inputs and 2 outputs - one conveniently located at the front and one at the back. One drawback is that there is no midi input/output so depending on what you are using the interface for, this could be a feature that is required. If you’re a producer looking to record midi sounds, you may want to find a more suitable sound card but if you don’t intend on using midi, this is a great budget interface. For around an extra £60-£70 you M-Audio offer a ‘producer bundle’ which includes a set of headphones and a condenser microphone too - everything you need to get started producing your own tracks with your own vocals.

Not only is the Native Instruments Audio 6 interface completely accessible for beginners, it also has the kind of flexibility and connectivity that producers can grow with. It’s one of the most expensive sound cards on our list, but for good reason. With its 6 in and 6 out audio interface, the Audio 6 is perfect for producers who like to collaborate, and offers endless possibilities for your sound setup. It’s USB powered as well meaning it’s great for simplistic connectivity for recording and on the road powering. Overall, it’s suitable for beginner producers with lots of ideas or veteran producers who want to showcase the best of their live setup for a gig.

It’s easy to get lost in the endless world of specs and technicalities, and it can seem daunting when you’re first starting out. But just like our earlier blog on best monitor speakers for your setup, it may just take a little bit of research to help you decide what’s best for you. If you’re a long time producer and you’ve finally discovered your niche sound, you may want to splash out a bit more on a sound card that has a multitude of inputs, outputs, midi and software accessibilities to incorporate your rig, perhaps for a live set or an album concept. If you’re a bedroom producer, you may not need more than a couple of inputs and outputs for your guitar or vocals. To go even further, you might be a producer who tours a lot. In that case you’d want a sturdy, easily transportable sound card for on the go set ups and timely recording sessions. If you’re unsure of where you fit in as a producer or you’d like some more advice on sound cards, chat to one of our expert London Sound Academy tutors during your lesson!