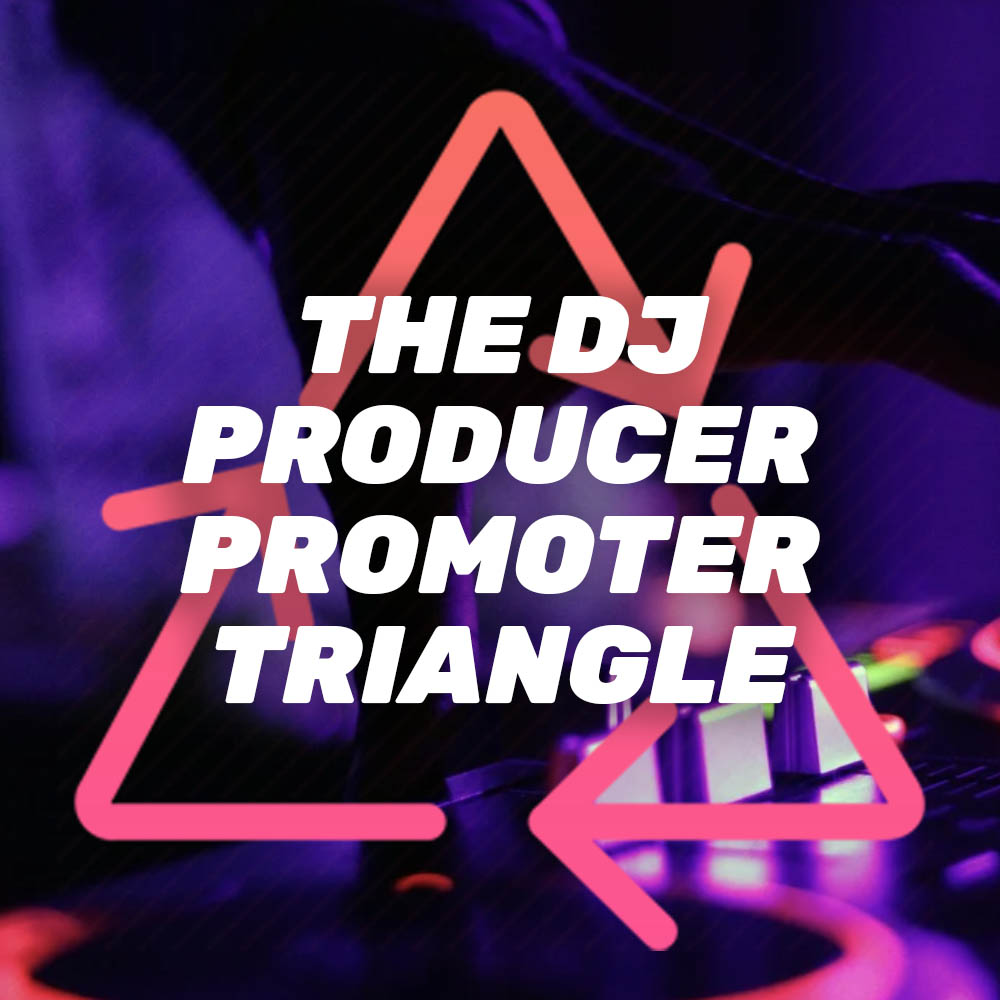 There are certain strategies that can help a DJ succeed in the music business. One of the most successful of which is the DJ-Producer-Promoter triangle. I'd like to help our DJ course and music production course graduates understand this concept and learn how to harness its power. Put this strategy into action and you'll see the results very quickly. You'll elevate your position in the industry and you'll find it easier to make meaningful connections that pay off.

If you want to become a successful DJ this is a must read!

Don't forget to check out more of my blogs here on LSA and here on DJ Gym.

How do DJs get big?

The first question that new DJs often have is, how do DJs get big? DJs get bigger gigs when they get famous. So the question is then, how did they get famous? Notoriety is something that can be built slowly and organically and sometimes it happens in a flash. Here are some ways that DJs gain notoriety. If you want to find out more head over to our blog 'What makes a headline DJ'

If you look at all of these ways that some DJs become big they all relate heavily to networking and promoting. Of course all artists, DJs and producers need to have the skills and talent but that will only get you so far. You need the connections too. Even if you made a great record you need to be able to get people to hear it. This is where connections and networking plays its part.

Many young DJs and producers give up early in their career because they learn the craft of DJing and production and then struggle to get any further. In all honestly learning the craft is just the tip of the iceberg. Once you've honed your skills as a DJ or producer you need to then find a way to meet people in the industry and connect in a meaningful way.

What I mean by 'meaningful way' is that you need some kind of catalyst, some kind of vehicle that will make that connection feed into your goals. Something you can barter with.

Just being a DJ or producer and networking on your own, attending conferences etc will only get you part of the way there. The reason for this is it's a one-way street. You are asking for something but not giving anything in return.

Now you realise that networking as a DJ and producer doesn't quite cut it in todays competitive industry. You need something extra, you need another string to your bow. When it comes to DJs and producers the best third string, the one thing that feeds back into your DJing and production career the most, is becoming a promoter. A promoter is the person that runs parties and club nights. The very events that book DJs and producers to perform. The same events that reach the target audience.

Think about it, if you have your own club night then you can use this vehicle in many ways.

Firstly, by running a successful event you will secure yourself a second income. Granted, running a night can also lose money but if you play your cards right you can create an income that will sustain you or even make you a killing. Some DJs I know have been running successful branded nights for over a decade and get thousands every week in proceeds.

You can book other DJs and producers to perform at your night meaning you can connect with them on a personal level. Having this deep a level of connection will mean that you'll be the first person they turn to when an opportunity for collaboration arises. Often, if you book them for your night they will then book you for their night, thus feeding into the triangle.

When you run your own party the cross-pollination of audiences helps you grow. You'll have fans of yourself as a DJ, fans of your productions and now also fans of your nights. They will feed into each other. Further audience growth can now occur by working with other brands. When your brand or club night partners with another your audience can double. Every collaboration is going to extend your reach.

Having your own club night also provides the best stage for you to perform. You've built the audience so you know what they like. You know that DJ booth better than everyone and how to rock the crowd. You should be the headliner of your own night and make sure that your name appears next to any famous DJs you book. The kudos of these bigger names will rub off on your brand.

Many promoters will build up mailing lists, often in exchange for free entry or discounted entry to the night. Once this person is on your brands mail-out you can also use it to market your DJ sets elsewhere and music that you've produced. Just make sure you follow all the rules about data protection and GDPR.

Click here to learn how to start your own club night

There are some other triangles that could also work in your favour, radio DJs and TV presenters often use this system alongside DJing, production and promotion. If you're looking for even more ways you can increase your audience size and notoriety look into becoming a radio presenter or tv personality or youtube/social star. Many of our alumni have gone onto success from radio work or TV presenting. Notably Sarah Story who now hosts a radio show on BBC Radio One and also tours internationally.

Where does music production come in?

Music production is one of the most essential cogs in this machine. The remixes and tracks you create are the business card that introduces your name to an audience.

Great music will transverse borders and you can become well known in a country that you've never set foot in. In order for this triangle to work, you need to have a solid foundation in production and be creating music people want to hear. Popular music will increase the speed in which you gain notoriety and attention.

Growing a fan base can take years but some people get lucky, release a viral track and are suddenly catapulted into the upper echelons of the industry.

When creating music you do need to consider your audience and also think ahead of the curve. It's far easier to ride a wave of a new sound than to try and catch up with an old trend. Try instead to be a trendsetter and become known for a unique style. You can colonise a new sound or scene much easier than something that has already peaked.

Want to supercharge your triangle? If you are the first to adopt and utilise new technology you will accelerate your goals.

New unexplored territory that is not already dominated by other artists will always be the best opportunity for new DJs and producers to break into the industry. For example, if you are the first to adopt a new social media channel you often get the most followers because. The first people on Myspace, Facebook, Instagram, TikTok all reaped big rewards. Keep an eye out for new platforms and become the first to dominate them. Another technological edge you can use is to excite audiences with a new way of doing things. This could be using different DJ technology, production plugins, sound or lighting.

Think about how you can harness the power of a new technology before anyone else.

Want to become notorious? One of the best strategies is to reach for the low hanging fruit that is 'look'. Brands and people that have an exciting look will naturally attract attention. If you blend into the background people will barely notice you. Why not work on some kind of iconography with your style or look. It can be as simple as a funky hat, think Boy George, a helmet, think Daft Punk or Deadmaus, an attitude, think Grace Jones or Cardi B, or perhaps the whole package, think David Bowie, Prince or Bjork.

If you're interested in learning how to DJ or produce get in touch to discuss our courses.