What Makes a Headline DJ? 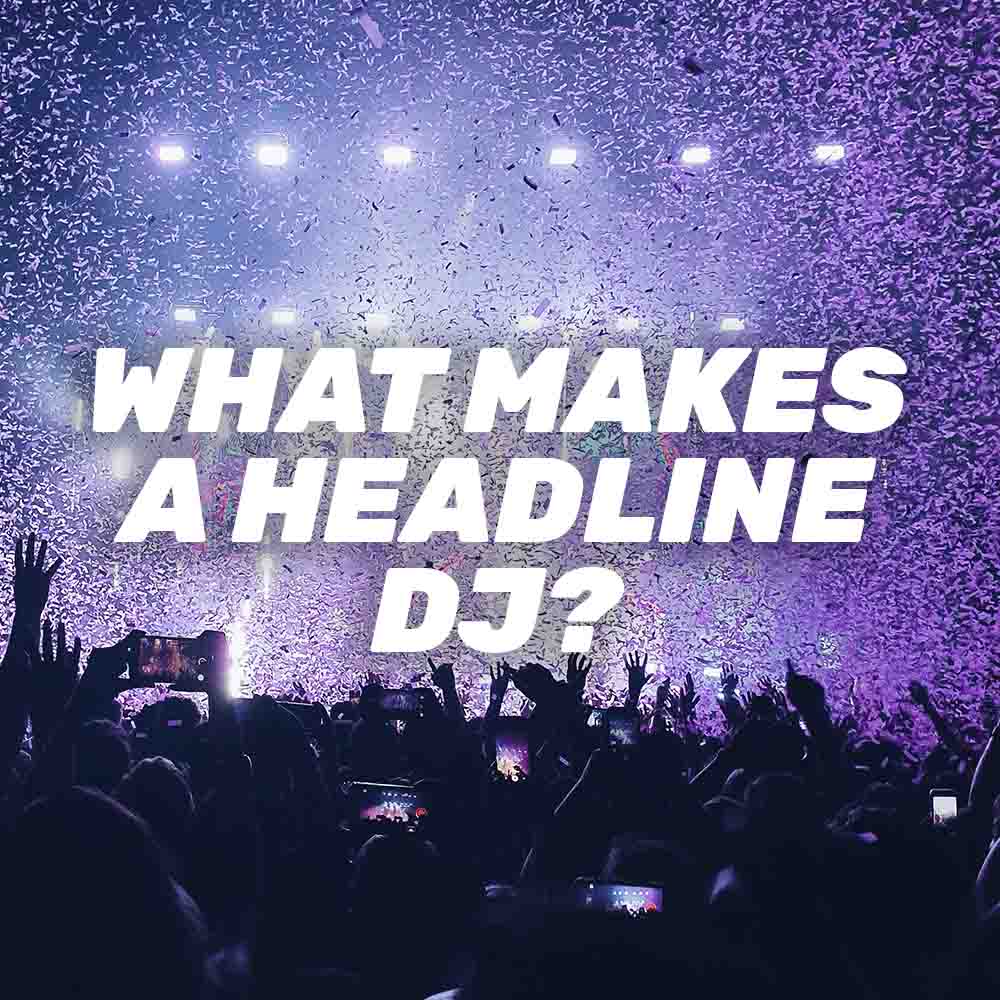 What makes a headline DJ? ‍

Headline DJs truly are the rockstars of the rave. The champions of sound. They are the envy of punters, promoters and supporting DJs alike. Whether it’s a glam spot at Glastonbury or top dog in a dimly-lit warehouse gig, headliners are undeniably there. But is there a reason everyone’s heads turn towards the stage when they play or did they just get lucky? You guessed that in most cases, they probably didn’t. So what have these DJs done, and what skills do they have, that so frequently land them in the top spot on the lineup and the biggest pay cheque? What makes them a headliner?

A USP (unique selling point) is something that makes them stand out and make them unique. There are thousands of DJs who would be capable of headlining a show but when promoters book an act they want something or someone special. Headline acts will help promoters sell tickets for their shows and in turn, they will pay them a larger fee. So the question of what makes a headline DJ real boils down to how headline DJs use their USP to attract crowds to events. Here are some factors that go into being a headline act.

‍They have a large following

Well, let’s start with the obvious - a large following. A huge element of why headliners are at the top of the roster is because promoters, venue owners and most of all the actual DJ, know they can sell the necessary tickets to make the club night profitable. This can only be done if the DJ has a large and dedicated fanbase, who would happily pay whatever the cost of entry is. Some successful headlining DJs have often built themselves up under a certain brand or alias, which creates buzz and excitement with the fans. This process can take decades but sometimes less.

Often, the reason why headliners can sell out large crowds, or have thousands of people flocking to the main stage to see them in the flesh is that they have acquired prior status as a celebrity. There are dozens of ways they may have done this and here are some of the most common.

Take the DJ SUAT for example. He built a cult-like following for his unique brand of on-the-go DJing. He did this by strapping a GoPro and a pair of decks to himself and taking walks around various cities while playing a DJ set. Many antics happen in the videos like him getting arrested or escorted from certain areas, this all adds to the entertainment and viral factor of the videos.

This not only was entertaining for viewers, but also passers-by, and SUAT encourages them to get involved. Now he regularly tours the UK doing headline slots because of the brand he built. Recently he headlined Egg at an event where we also hosted a room.

In the age of social media, celebrity status can be obtained by being an influencer or appearing on a reality TV show. It’s then that these celebrities often segue into DJing where they can bargain headlining spots because promoters know that fans will recognise their name and be more likely to come and buy a ticket.

In some cases, DJs can become celebrities simply by being notoriously good at what they do. Their unrivalled skill and work ethic becomes recognised by fans and music industry heads alike. Although this is the most organic method, it takes many years of effort. Take EZ or James Hype as examples, they are both incredibly talented DJs and have grafted for many years to get where they are today.

The main way to gain notoriety without having to resort to more crude methods like reality TV is to release popular music. DJs who learn how to produce and then successfully release music that then becomes popular will get more DJ gigs. The cream of that crop will then also secure headline DJ gigs.

Most headlining DJs are also music producers. This is why at LSA we offer both DJ and music production courses.

These headliners have spent years working on building up their sound, making it personal to them until they get noticed by a label that picks up their song or album. It often takes years of radio play, streaming and promoting their releases to build up hype until they can bag a headline slot. Having tracks of their own to drop is widely considered a USP for many DJs who produce. After all, no other DJ can headline a show playing just your music. Some producers will also take things a step further and create entire shows that are closer to concerts than DJ sets, Daft Punk for example.

To be a headliner, one of the most important jobs to nail down is to elevate and maintain the party. This applies to wherever the headliner is playing and there are often no exceptions. Being able to read the crowd in real-time is an undeniable skill that headliners have which is only gained through years of precious time spent DJing to a live crowd. In addition, they need to perform behind the decks. DJs who show passion and movement and performance skills behind the decks will get more crowd engagement. If the crowds have a great time watching a DJ play they will want to come time and time again to see them perform. A great upcoming DJ who is delivering energetic shows at the moment is Absolute. Watch how his energy behind the decks ignites the crowd.

They have a memorable look and brand

DJs are in the media spotlight all the time. They become embodiments of their own brand. Many DJs will have a signature look that will help them become memorable. Jax Jones has recently been rocking these epic hats which we love. Other DJs might have a stage costume or specific look, Deadmaus for example.

‍They are spearheading a new sound

Some DJs and producers will rise the ranks faster if they spearhead a new type of sound or ride a wave of a new popular form of music. For example, when EDM became massive relative newbie Hardwell has a meteoric rise to the top of massive lineups across the globe, this was in part due to him claiming a new sound, EDM, which would become his signature. His name was then synonymous with that genre of music and thus he was the go-to headliner to book.

‍They have another string to their bow‍

Many DJs will have additional enterprises that will help them network and climb the ranks of a lineup. Many DJs also run their own events, record labels and radio shows. This means that they have their following as a DJ but so does their other brand. This results in the ability of that DJ to bring a bigger crowd or have a larger audience. These other enterprises often help each support each other. There is a feedback loop when it comes to promoting brands with other brands so this cross-pollination of audiences will give you more leverage as an artist.

Every headlining DJ has their best-kept secrets, but as you could probably guess, a solid network spanning the industry is not one of them. You can bet that the headliner has spent years building contacts in record labels, promotion companies, and clubs across the globe. One of the best ways to network as a DJ is to attend music events and music conferences. The most notable music conferences in Europe are IMS (International Music Summit) in Ibiza and ADE (Amsterdam Dance Event). Amongst the attendees are dance music labels, radio stations, tech companies, booking agencies and PR companies to name a few. All of these people go to network and discover new and lucrative opportunities, many of which may involve up and coming DJs.

Lots of other DJs attend too which invites the opportunity to discuss collaboration opportunities. Making friends with other DJs, producers and promoters can be extremely crucial in the networking space. In a lot of cases, it can really help with elevating one another's careers. Who knows, they may become part of your collective!

We have a huge network of alumni at London Sound Academy and our alumni Facebook group has been a catalyst for collaboration between DJs and producers for many years. Join us here and you could become a member of our fantastic community.

There is no good being an exceptional DJ or producer if you never let anyone know. Promotion is key. Every other act will be promoting themselves so if you want to play the game you need to master this skill. Promoting starts with your USP, you need to have a solid understanding of what your USP is and what your target audience is. You then need a plan of attack! Make sure you have a promotional plan and strategy and then execute it.

If you're looking for a film-worthy DJ studio you can book a room at LSA!

Sometimes there are no shortcuts and you simply need to dedicate the time and energy to achieve your goals. In a competitive space, there are always those who might go the extra mile to reach the prize. If you’re not putting in the same effort it’s going to be hard to succeed. DJs and promoters who combine long hours invested into their dream along with savvy decisions will win the race in the long run. It's a marathon not a sprint for most DJs. Yes, some might get lucky and produce that one big hit record but you can’t put all your eggs in that basket, plan for the long haul, switch off Netflix and get working on all the above.

There is no set path DJs need to follow to become a headliner, but these are a few things that the most successful headliners tend to have stored under their belt. So, now you know them, let's get you a headlining slot! Why not look at your top ten favourite headline DJs and ask yourself, how did they do it? Figure out their USP and their route to success for inspiration. Reading interviews of your favourite artists is often also a great source of knowledge.

If you would like to learn how to DJ and produce join our DJ or music production courses either in London or online. Graduates and you can join our supportive alumni network and get your first gigs and releases.